Editorial | Doom: The art of its design. 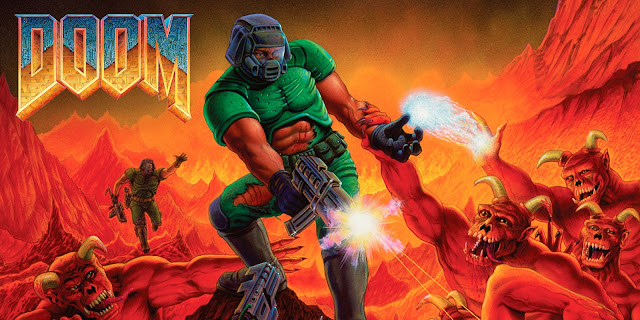 Doom! A series that has been around for nearly three decades, it cemented the genre that is the first person shooter. It took the foundation that was set by Wolfenstein 3D and amplified it, but why do people to this day still flock to this game? Well I think it’s because and I know I’m going to get some flak for this, accessible. Now that doesn’t mean the game is easy, no it is exceedingly hard especially in the later chapters but it is so easy to pick and play as well easy to understand, however it is very hard to master. The question I want to ask, why is Doom great? Now to preface this article I will be only talking about Doom, Doom II and Doom (2016) as the share similar design traits, plus this rather appropriate as Doom: Eternal is out in a couple of months (at the time of writing).

Now you would think narrative doesn’t play a huge role in the Doom series and you would be right with the original two games, as John Carmack stated “Story in a game is like story in a porn movie, it’s expected to be there but it’s not important”. Now that does reflect the games he worked on, but that comment is rather silly if you think about it now, however Doom (2016) takes a lot of ques from Half-Life with its storytelling. Yeah the Doom Slayer has as much interest in the narrative as an enraged gorilla as he throws a monitor away, however you can see there is a bigger picture with him and Hell, through flavour text and audio logs. It’s not particularly important to enjoy Doom (2016), but it was nice that id Sofware included it for those who cared. 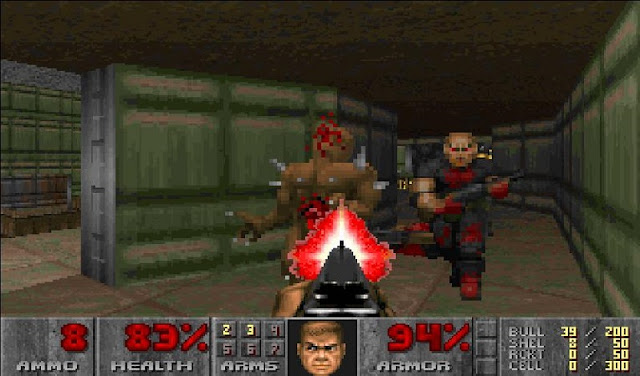 Now to get into the design of the game, what makes the first two Doom games special? Well for one the map design, one could look the map design of the old Doom games and find them confusing due to their maze like design but to quote Todd Howard “It just works”. You have to navigate them, collecting items, unlocking secrets and finding new and powerful weapons. Yes some of the later levels can get a bit strenuous due to their sprawling mazes, but if you know what you are doing you can finish them in 2 minutes. Some levels have aged worse than others which have an illusion of difficulty, however most are fine and are still a joy to play. 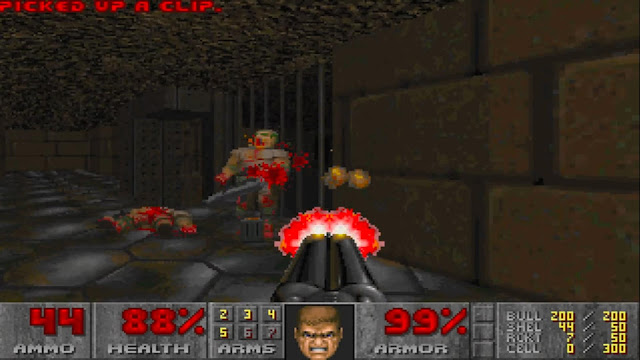 The combat is also an element that plays a big part in this game, where you have a wide selection of weapons that each have a purpose, minus the pistol which is about as effective as harsh language. You have the usual shotguns, chainguns, rocket launchers and chainsaws, you know the basic assortment of weapons you need for a Hell based apocalypse. However the more exotic plasma rifle is great if you want to clear crowds of demons in quick succession; however the BFG the Big “Fucking” Gun is the definition of the series. The BFG will obliterate everything that has a pulse in the near vicinity, generally reserved for more powerful enemies or boss fights, but it is fun to discharge it in a crowd of demons as they explode into meaty giblets.

The combat was given a new coat of paint in the 2016 reboot; it retained the same action but added some extra bells and whistles. For one some weapons and kills are mechanics based, now I know what you are going to say “Sam what do you mean”? Well certain weapons have a purpose for the gameplay, for example the glory kill system. When you have dealt enough damage to enemies they will become stunned and you can execute a glory kill, this doesn’t just act as a flashy and over the top gory kill, no they will give you health when you do this action. What this does is encourage constant movement as you can’t sit in cover, because otherwise you might as well as pull your trousers down and take it like a champ. What you get is this constant rhythm of running and gunning as you prioritise certain enemies, it keeps encounters fast and flowing.

The other mechanic is the chainsaw, what this does is give you extra ammunition however it requires that you have a certain amount of chainsaw fuel depending on the enemy. For example if you have one bar of chainsaw fuel there is no way you are taking down a Hell Knight, which is reserved for Imps and zombies. It does seem out of place that your enemies burst into ammunition as you split them in half like a piñata, but I thought we left realism in the void as we are blowing the top half of a demon off with a 12 gauge when running through Hell.

Let’s talk about the presentation, more so about the first two games not to say that Doom (2016) isn’t a good looking game, but it doesn’t standout compared to the early games. Each sprite is unique and easily identified; you have the individual looks of the zombie marines, with the green hair of the rifleman, the shotgun sergeants with black clothes to the blood soaked mouths of the chaingun wielding zombies. Not only that you have the Imps, Cacodemons, Hell Knights, to the towering behemoth that is the Cyber Demon. They all look unique, plus their telegraphed animations give you a clue to how their attacks work.

Doom is a series that people still talk about nearly 30 years later and for good reason, because it is a game that you can pick up and play no matter your age or experience. However it is a game that is tough to master, it brings you new challenges with each level, each chapter and new enemies that emerge from the darkness. It’s a game series that every gamer should play, plus it can get you ready for the carnage that is Doom: Eternal!