Halo 2 Review - Not so heroic on Heroic difficulty. 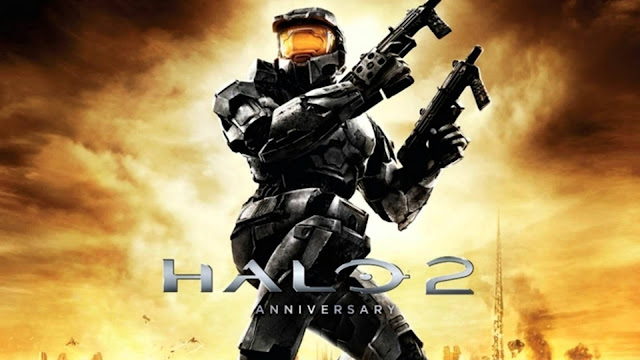 Halo 2 was one of the most anticipated games of 2004, and for good reason for one it was the continuation of  Combat Evolved but it was the forefront of Xbox Live, the paid service (which you shouldn’t be paying for) to play games online. I’m going to talk about the campaign as I have finished it on Heroic difficulty recently and I must say it has some questionable elements on the higher difficulties when it comes to A.I., hit detection, ammo scarcity and bullet sponge enemies. Does this make the overall experience bad, no but it did make me want to repurpose my controller as a picture hook in my wall. 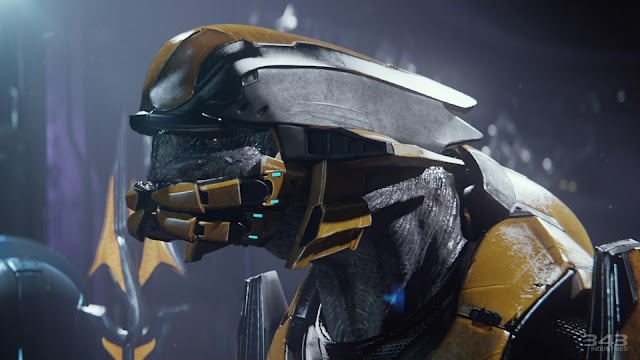 Halo 2 takes place directly after the first game, where it starts off from the perspective from the Covenant as a high ranking Elite is on trial for the destruction of the last Halo ring. He is branded as a heretic and is put on display to be made an example of, but the council have other plans and make him the Arbiter and send him on a suicide mission where “the council will have their corpse” to quote one of the prophets. It then switches back to The Master Chief and he is back to be rewarded for his actions from the first game, and it is not long until the Covenant attack and board the space stations situated above Earth. What I like about this game is that you get to see both sides of the conflict; it shows that some races within the Covenant are not as evil as the UNSC think; it’s a nice change of pace rather than just seeing it from the “heroic” Master Chief. 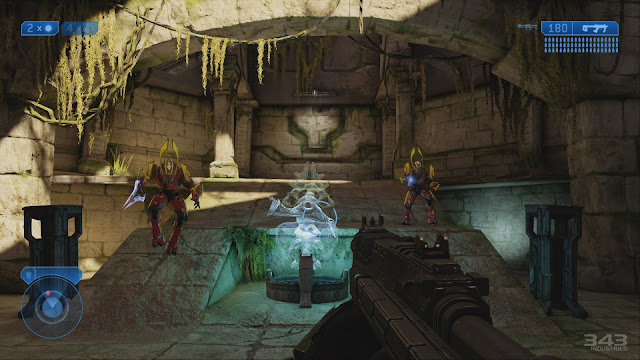 Gameplay has been changed from the first game, you no longer have a fix health bar instead you have regenerating shields only where you can take a few hits when they are down. This was the period when regenerating health was becoming the norm with Call of Duty 2 adopting the style the next year. I played the campaign on Heroic difficulty and compared to Combat Evolved it is not fun, it becomes unfair with the amount of damage you take and the damage you output especially when they introduce the Flood (again) and Brutes. 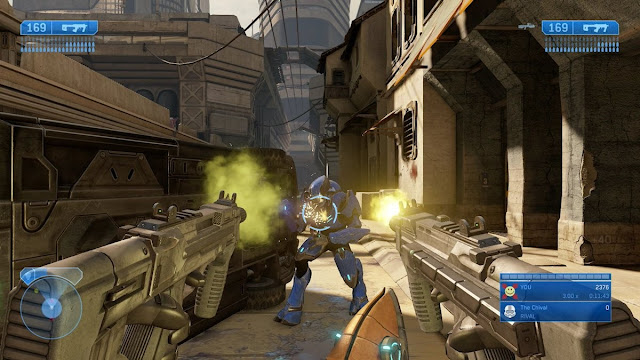 The problem with playing Halo 2 on Heroic or above is the fact is you are as fragile as a mouldy peach. Now look I understand that they have to turn up the amount of damage that enemies output, but to randomly have my head blown off by a Jackal sniper that I could not see is where the game starts to test my patience. Let’s talk about the Brutes, they replace the Elites half way through the story and you would think great a new enemy to fight, but no they are slog. Now I understand presenting a challenge at a steady curve, but when the Brutes are introduced it turns into a gradient as steep as Cheddar Gorge as they take gunfire as if you were flicking beans at them. The only effective weapons against them are precisions weapons such as the Battle Rifles, Carbines, Beam Rifles and Sniper Rifles, but this still takes a few shots and you will find yourself constantly out of ammunition.

They somehow made the flood worse in this game, they introduced the Elite class of flood who now have shields and yes that is just as irritating as it sounds as the flood were hard enough to kill with conventional weapons. They spawn behind you more in this game compared to CE and there are more parasites that revive fallen Flood, where I found myself going around with an energy-sword chopping bodies up like an OCD murderer.

What is new with Halo 2 is duel wielding, where you can use two one handed weapons at once, which range from very effective to what I am I shooting feathers, I’m looking at you duel SMGs. The most devastating combination are the duel Needlers, which can destroy any enemy that gets in your way so much so that they had to tone it down in Halo 3 as you could only use one at a time.

I played the anniversary edition of the game via the Master Chief Collection, and it is absolutely beautiful as they remade this game from the ground up in terms of visuals. What is fascinating is that you can switch from the new visuals to the original Xbox presentation, and it is jaw dropping with how far we have come in the visual department in the last 10 plus years. The game runs at 60 frames per second in the remake, although it does have a bit of a wobble when things get busy during intense firefights.

Halo 2 is not a fun game on higher difficulties, the firefights become unfair with the brutes and The Flood are more irritating than they were in the first game. If you’re going to play this game, play it on normal because Heroic or above is not worth the strain.