Journey Review - Quite the journey indeed. 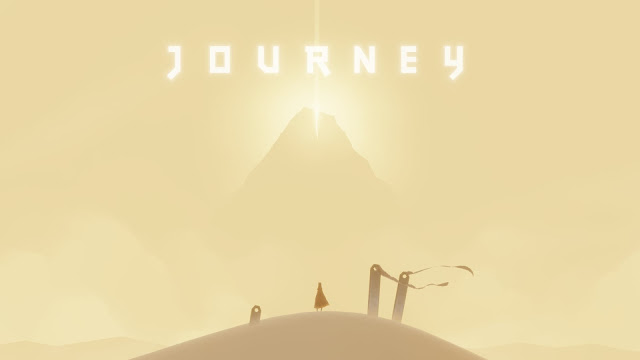 There are some games that don’t come along often that define the medium as a piece of art, that can be relaxing and sombre at the same time. Journey is a game that I have been meaning to play for years, and I finally got my chance to play through it recently due to it being free to download (at time of writing) and I have to say it is one of the most beautiful games I have ever played! Originally released on the PlayStation 3 in 2012, Journey is just that a journey where one must find themselves. So is it good? Well I think you know the answer to that, let’s get into it. 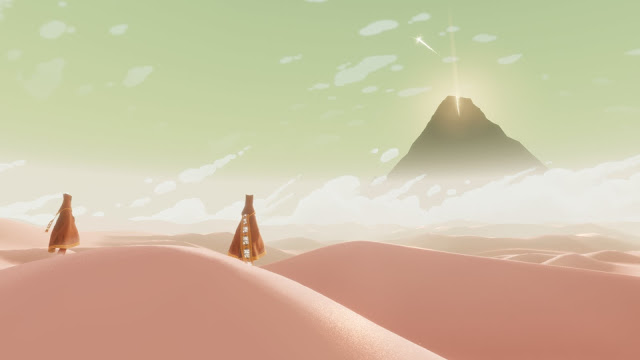 Journey’s story is vague purposefully vague, but that is the great aspect about the game’s narrative that it is up to the player to make their own conclusion of the story. The basic premise that you are trying to find yourself and restore balance in the world; you travel beautiful yet ruined deserts with nothing but you gliding the sands. By the end of the narrative what we have is something that is emotional and beautiful, something I haven’t experience in a while and in other lights I would find it rather pretentious but not this game. 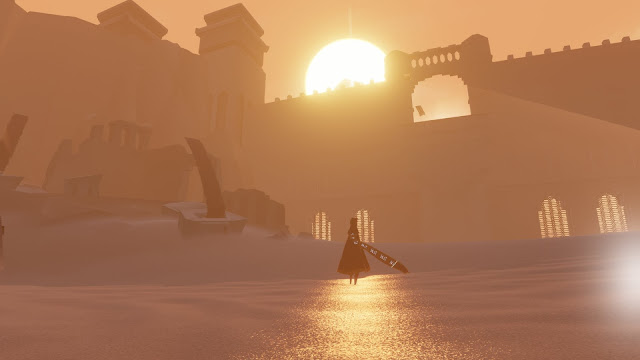 Journey is a puzzle platformer which has elements of co-op play, however at first it is not obvious with the co-op play as the other players feel like they are part of the world and fit in and don’t standout. It’s this level of immersion that elevates Journey on a different level, where it never breaks and keeps you sucked in through the fantastic yet short adventure. The gameplay is minimal but that is not a bad thing, you can jump and glide to help you get to elevated platforms. However you can only glide when you collect certain items in each level, so you have to be somewhat tactful when using it. It’s not a particularly hard game as it is rather linear and straight forward, but it doesn’t make it completely obvious as it gives you subtle visual ques of where you are supposed to go as well as what to do.

There is online co-op in the game, but it is not presented in a traditional manner as you can’t just invite people to help you out. How this works is that it is like the title describes, a journey. Where you meet strangers on the way, where you are unsure if they are friend or foe as they hint at you to follow them. It’s this dynamic multiplayer system that works in the game’s context of the narrative, because in real life we are weary of strangers and having to gauge that trust with someone who you don’t even know let alone their name makes the game tense in a way. What is great about this is that at the end of the game you get a list of gamer tags of the people that helped you out, almost encouraging you to send them a message of thanks. It’s rather heart-warming when you think about it. 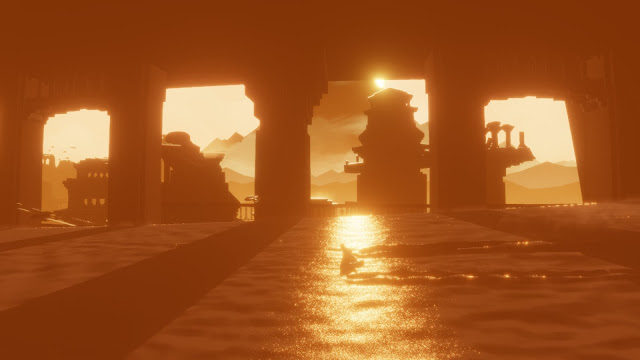 The presentation and soundtrack are absolutely superb, considering this was initially a 2012 release on the PS3 it looks miles above anything on that hardware. The baron deserts look wonderful, coupled with the sun turning into a pleasant orange glow the further you progress. It’s not all desert as you encounter a mountainous region, frost laden and peppered with snow with an ominous soundtrack as you traverse the tundra. The soundtrack composed by Austin Wintory is excellent; it can range from relaxing, emotional and even scary in parts as you go through the more precarious areas.

Were there any issues with the game? Not particularly although there was one slight niggle that got to me towards the end of the game. The game crashed just as I was at the end of the game, where I had to start that level all over again however that happened once throughout my entire experience.

Journey is just that, a journey that we all must embark on at least once in our lives. It this combination of art, video game and an experience that make for a totally fresh and unique take on the interactive medium, which I highly recommend. At the time of writing this game is free to download on the PS4 until the 6th of May, so grab it while you can.