Hard to believe that the Far Cry series is still going, case in point with the recent announcement of Far Cry 6 (at the time of writing). This time I want to cover gameplay aspects and settings with in the series, and what makes them so compelling and fun. The Far Cry games have always had a special place in my heart since my teenage years when I first explored baron deserts of Far Cry 2, with chaotic moments mix with more sombre moments. Let’s get into it. 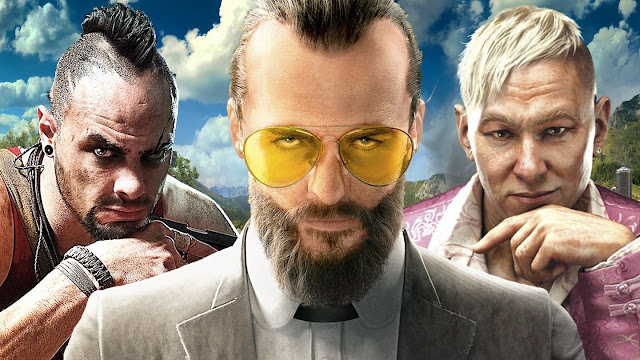 Oh look I’m contradicting myself already by talking about the villains which is narrative based, but to be fair they tend to be the first thing you see in each game as they set up the context for your adventure. Most of the villains tend to be absolutely psychotic although The Jackal is an outlier as he is more with it, but anyway they are mad with an agenda with you the protagonist. From the psychotic ramblings of Vaas, the calm yet volatile mind of Pagan Min and the insane brainwashed mumbling of Joseph Seed. They all serve their setting and purpose of an antagonist, which serve as the context of each game and elevates the narrative.

Let’s talk about setting when a Far Cry game is announced my curiosity stems to where it is set, because the setting is often a great backdrop to the chaos that is about to ensue. From the tropical Rook Islands, the frost laden mountains of The Himalayas and the rural farms of Hope County. They all feel unique and will have your mouth dropping to the floor with their beauty; they make you want to explore every corner to see each detail. Exploration is key in these games as you have to craft items for yourself, now I know crafting is generally met with a resounding groan but honestly it is at a basic level where you have to hunt an animal and then you can craft holsters etc. Nothing particularly complex, but it encourages you to cover the map to hunt for supplies it adds to the survival and gritty nature of the series.

Gameplay is one that can often be contentious, on one have you have those that it gets stale and doesn’t really innovate and on the other you have those who say it has different outcomes and possibilities to a situation. I fall into the latter because yes you can break the game with a suppressed sniper rifle if you are boring, but you would be missing out on the other weapons and opportunities when conquering strongholds and enemy encounters. 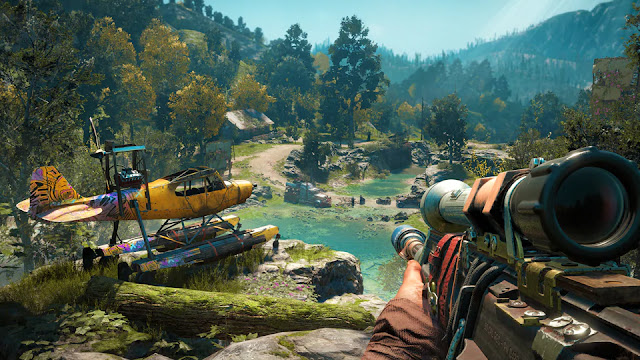 The game gives a lot of weapons and tools for a reason, you can scope out enemies and take the silent approach and pick them off with your bow and machete like the ghost you are. Or my favourite in Far Cry 4 storm through the gates as you ride an elephant and mow down everyone with a light machinegun, as you watch them run away and cower in fear. It is this flexibility of the series that it doesn’t punish you for choosing a specific approach, it actively encourages you by providing you with the right tools. There was one scenario where I assaulted an enemy base where I rigged several walls with C4, then I went back to a safe distance and detonated it and watched them all run around in confusion and then a tiger came out of nowhere to tear them apart. It is also organic with the wildlife too, speaking of which. 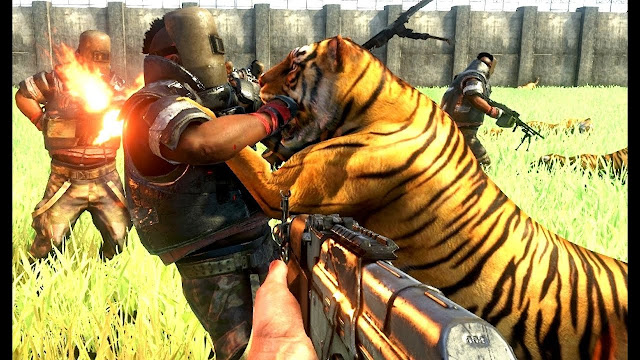 The wildlife adds to the gameplay too as they can be used as distractions, get in your way when an eagle decides to attack you when you are scoping a compound out or can be killed for bait. It is an extra string to the combat, as you will come across animals caged in bases where you can then shoot the cage and watch the entire base run around flapping their arms. It creates many knee slapping moments especially in Far Cry 5 where you throw some bait, and all of a sudden the game spawns a bear out of thin air. Granted it does break the immersion somewhat to see a bear spawn out of a tree but it us funny nonetheless.

Far Cry is a series that has flexibility with its gameplay it becomes monotonous because you find a comfortable playstyle without experimenting, as the game gives you the tools to find new ways of conquering challenges. I look forward to the release of Far Cry 6 with what new weapons I can use to terrify my enemies.