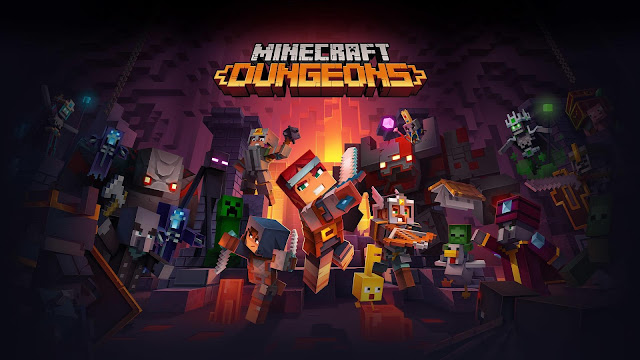 Sometimes you have to cleanse your pallet in video games after playing serious and violent games, and what better way to do that than return to the world of Minecraft. However not in the traditional sense, but instead the folks at Mojang throw their hat in the ring with the dungeon crawler genre with Minecraft: Dungeons. A rather adorable take on the genre, but without the blood, gore and demonic imagery of Diablo. Is it any good? In short yes.

Minecraft Dungeons takes place in the blocky world of the mining and crafting, where a young villager is shafted as an outcast, jaded by the situation he finds a magic McGuffin which gives him ultimate power and he is now the Illger. He causes chaos across the land, where you the hero have to stop him by killing waves of enemies. Look I wasn’t expecting a deep or complex narrative from Minecraft; I was expecting a story revolving around a sacred pork chop, but I digress. Anyway it’s a basic context to set up the game and it does the job. 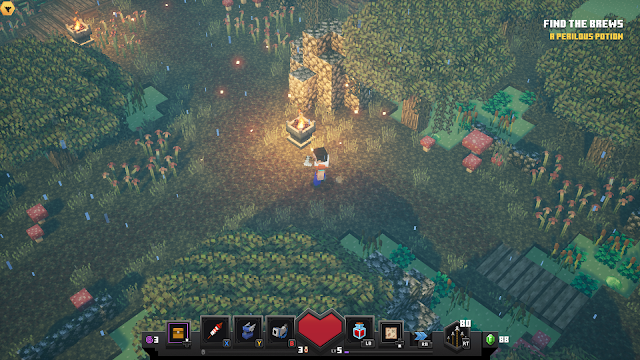 The gameplay in Minecraft Dungeons is eerily similar to a certain game named after a satanic figure, as it is a dungeon crawler but obviously set in the world of Minecraft and more simplistic gameplay to appeal to a younger audience but this is not a bad thing. You have a basic attack of slashing, slamming or stabbing enemies this of course depends on the weapon that you wield, but later on you unlock more powerful and devastating attacks with a Minecraft flare. My favourite weapon to use throughout my play through were the duel scythes, they are quick at despatching crowds and are fun to use. You soon unlock a bow which can be very effective with the vast amount of ranged enemies, but not only that you can amplify your bow attacks with fireworks which cause a huge area of effect damage as well more direct damage impact. 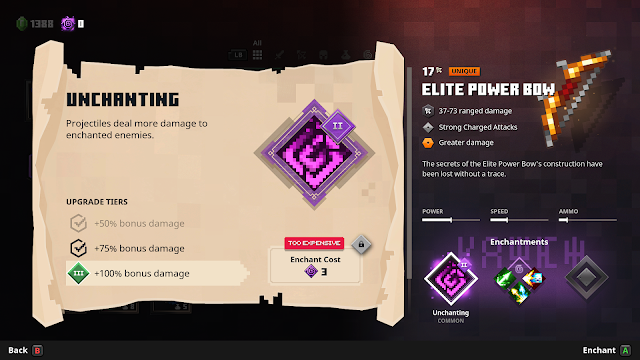 As you progress through the game you gain more items, abilities and other pieces of loot, you can unlock enchantments which will increase effectiveness of weapons or increase resistance with armour. These can be increased in a total of three times, but honestly by the time I fully upgrade a weapon or armour set I have found something new that is more powerful or resilient. The game is not particularly hard but there were moments where I found myself overwhelmed by the hordes of enemies, this was mostly due to playing by myself most of the time but in general it’s not hard at all. Most of the time I could clear out entire rooms with TNT blocks that I had stashed, making most encounters trivial at best. 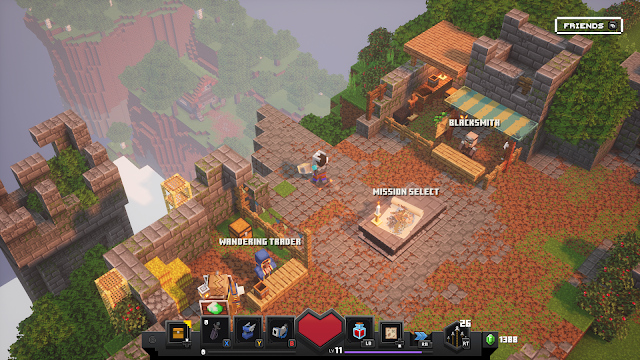 Presentation wise yes this is indeed Minecraft’s art style, however there have been more graphical enhancements sprinkled in with the lighting that make it look more vibrant and colourful. You have the warm glow of lava as you traverse the ominous caves, to the more colourful and serine green hills in your camp as soothing music plays. Speaking of which the music is fantastic, it can range from relaxing, to epic and as silly as this sounds frightening when you are fighting Endermen yes I am serious. Overall the presentation is beautiful as it sticks to the source material, while adding its own graphical flourishes.

Only issues I had was mostly stemming from performance, I played this on a bog standard Xbox One and it targets 30 frames per second, it mostly meets that target. However it does start to stutter when it loads new areas or when there are a number of enemies on screen, it’s not immersion breaking as it doesn’t happen too often but it happens here and there for me to notice.

Minecraft Dungeons although and easy adventure is something I can relax and zone out too, it has a beautiful art style, gameplay that feels good as well just something to cleanse my palette after playing so many violent and serious games. I highly recommend it, especially if you have a few friends to tag along.