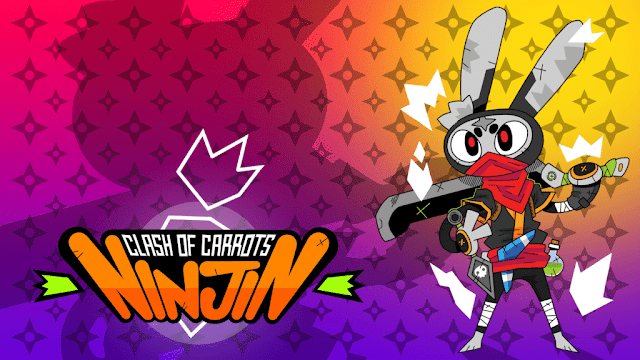 There times that I question the contents of my inbox when PRs and publishers send me games, where I have to check the email twice thinking it is spam. This was the case with Ninjin Clash of Carrots where I questioned the quality of the game before playing it, however surprisingly the game is really fun and addictive with its gameplay coupled with a beautiful and colourful art style. Plus it’s nice to play something that doesn’t involve a lobotomy with a 12 gauge.

What I like about the story of this game is that evokes the days of gaming that were simple, where it gives you a thin layer of context and tells you go on your bike and get on with. You play as a ninja rabbit, where his village is raided and all of his carrots are stolen, it’s like Donkey Kong Country but you are a rabbit and instead of your banana horde gone your carrots have been taken. It’s not deep but what did I expect with a game where you play as an anthropomorphic rabbit that dresses like a ninja. 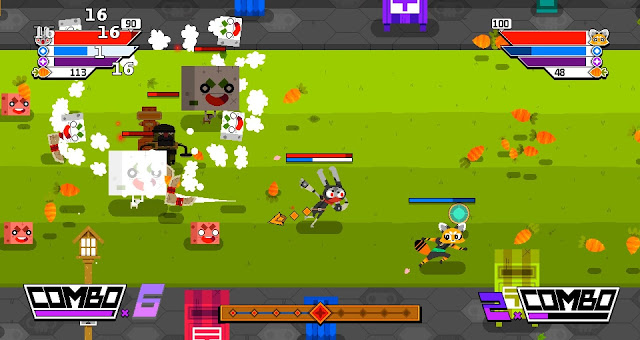 The gameplay is a wave based brawler, but you don’t stand in one place and beat up enemies in the vicinity you are constantly running as a relentless horde of foes come at you. It does take a bit of skill and reflexes because it does start off easy, but when you get further into the game it throws more enemies at you that need to be taken down in certain ways. These could be enemies that explode on impact where you have to throw ninja star at them which will cause an area of effect explosion taking down other enemies to enemies blocking your way where you have to dash behind them. You have a few abilities very basic, but it gets the job done, you have a standard attack with your sword, a dash which can get around enemies that are blocking your way and throwing weapon to deal with enemies that explode. 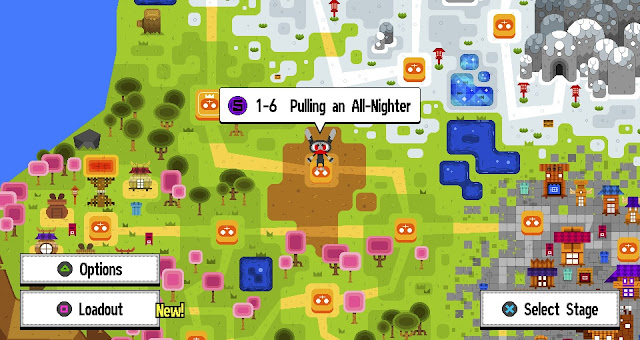 These all few great when you use them in tandem, where you are dodging at lightning speed cutting through a legion of enemies as they explode into carrots. The controls are very tight and responsive; I did not notice any input lag it was overall a joy to control. You go through levels on an over world map similar to Mario, I like this because mainly it is a joy to look at with how much colour there is. 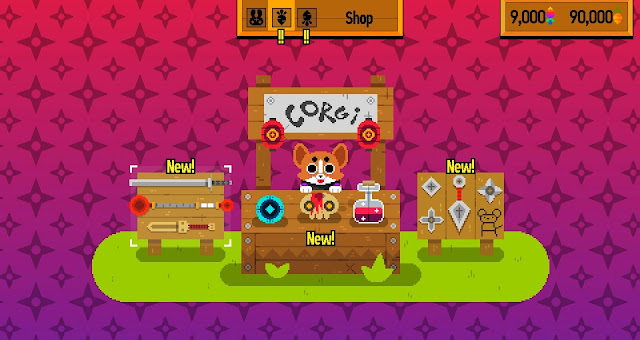 Visually the game looks fantastic, this is probably one of the most colourful games I have played this year, it’s like playing through a rainbow with the spectrum of colours there are within this game. The game runs well too, it runs at a buttery smooth 60 frames per second and it never drops and that is maybe due to its simplistic art style.

Was there anything particularly wrong with this game? Not really, but I suppose I could say that it does get repetitive after a while, but to be fair I find if you play the game in bursts it is fine.

Overall I was rather surprised with Ninjin Clash of Carrots; it was a game I had no expectation to enjoy. However its charming art style and fun and tight gameplay had me hooked on the game, plus I was enthralled with how much colour there is in this game.