Crash Team Racing: Nitro Fueled Review - The 90's are back! 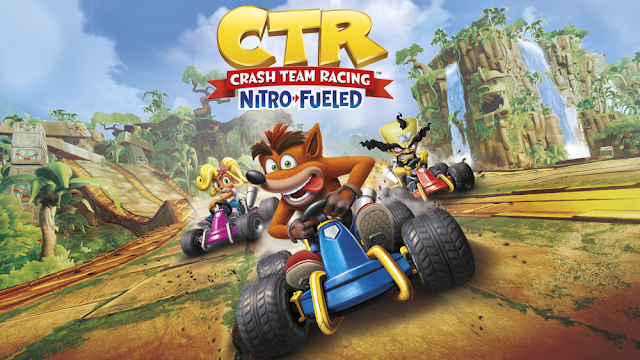 The kart racer was once a genre that dominated the mid to late 1990’s, this mostly stemmed from the success of Super Mario Kart in the early 90’s. Other developers tried to replicate Nintendo’s formula, but most were unsuccessful however Naughty Dog threw their hat in the ring with Crash Team Racing in 1999 and almost beat Nintendo at their own game. Fast forward 20 years later and we have a full remake of the game, and I have to say it is a truly faithful remake coupled with extra content that they didn’t have to add but they did anyway. Is a worthwhile remake for current fans and new comers? Absolutely, let’s get into it.

Crash Team Racing has a plot, but it’s not anything particularly complex just something to set the adventure mode up. An alien called Nitros Oxide wants to take over the world and turn it into a giant car park, but he gives the characters of the Crash Bandicoot universe a chance by racing him. He wants to race the fastest driver on the planet, and if they win they stop him from turning the planet into a large multi-story car park. The plot is completely unnecessary, but the voice acting is fantastic and it doesn’t take itself seriously and got a couple of chuckles out of me. 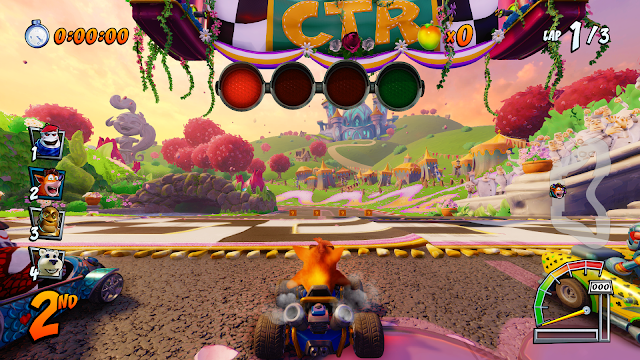 Gameplay takes certain ques from the Mario Kart series; however it puts its own spin on the formula to differentiate itself from the plumbers racing escapades. For one as I mentioned in the plot synopsis it has an Adventure Mode, what this entails is that you complete various races to unlock trophies, to race bosses and eventually to race Nitros Oxide. However that is not all, you can go back to various stages and complete various challenges, which can consist of collecting crystals, CTR tokens while winning the race at the same time and general time trials, nothing particularly out of place for a Kart Racer. 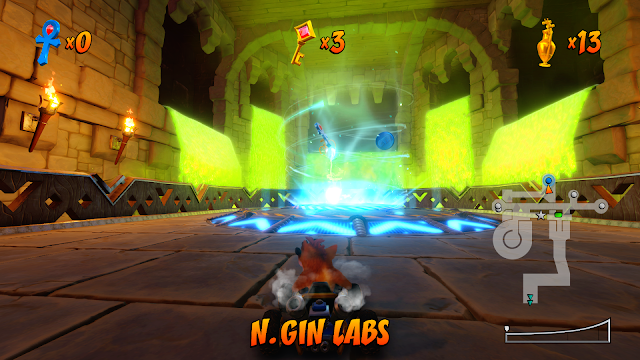 Crash Team Racing’s controls compared to other kart racers rely on speed and momentum; you have to chain drifts and jumps around corners which can make it a tricky game. I never felt that I was miles ahead of my opponents; races would be very close every time I would cross the finish line where they are nipping at my ankles. The controls are so tight that it feels immensely satisfying to throw a kart around a corner with a drift, to then accelerate with lighting speed with a boost.

Like most kart racers there are power ups, they tend to share similar properties to similar games in genre but in CTR they are thematically appropriate to the Crash Bandicoot universe. You have items such as TNT crates, rockets and masks that make you invincible for a short period. However these items can be increased in power, how you do this is by collecting crates filled with wumpa fruit which also increases your overall top speed. This keeps things fresh and players on their toes, as it can tip the odds in the favour of a losing racer, all the races are always very close due to this. 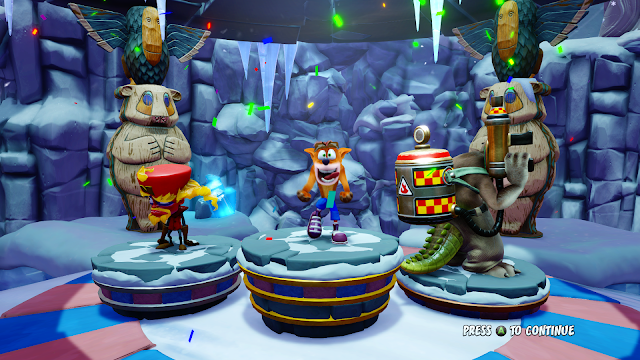 Visually this game is absolutely stunning, like the Crash Bandicoot remakes from 2017 it looks like a Pixar movie that you can play. Yes it is clear they have reused assets from the Crash Bandicoot N.Sane Trilogy such as character models and certain animations, but that is not a bad thing as they look great and is a good way to cut corners to focus on other things. All the characters look amazing with individual hair strands rendered with exquisite detail, coupled with the bright and colourful race course to compliment them.

The game does have some issues which bring it down, first are the loading time they are unbearable. I thought this may have been an isolated issue for the Xbox One, but no I asked PS4 and Nintendo Switch users and they have the same issues. The other problem is that the A.I. opponents can be extremely aggressive even on normal difficulty, now some will probably say this is intentional but this is ridiculous when they are miles ahead because you are not pixel perfect with driving. It led me to almost throwing my controller; it’s extremely annoying and a bit of a dampener on what is a great game.

Crash Team Racing: Nitro Fueled is a classic brought back to the current generation of gamers, it’s colourful, challenging and has lots of content to keep you occupied. Yes it has some technical issues, but that doesn’t get in the way the fact that it is a fun and light hearted game, this is a game I highly recommend just get ready for the challenging adventure mode.